This week's spotlight features Robinhoodrs, a prolific newcomer who focuses on supporting new players and growing the Albion community. 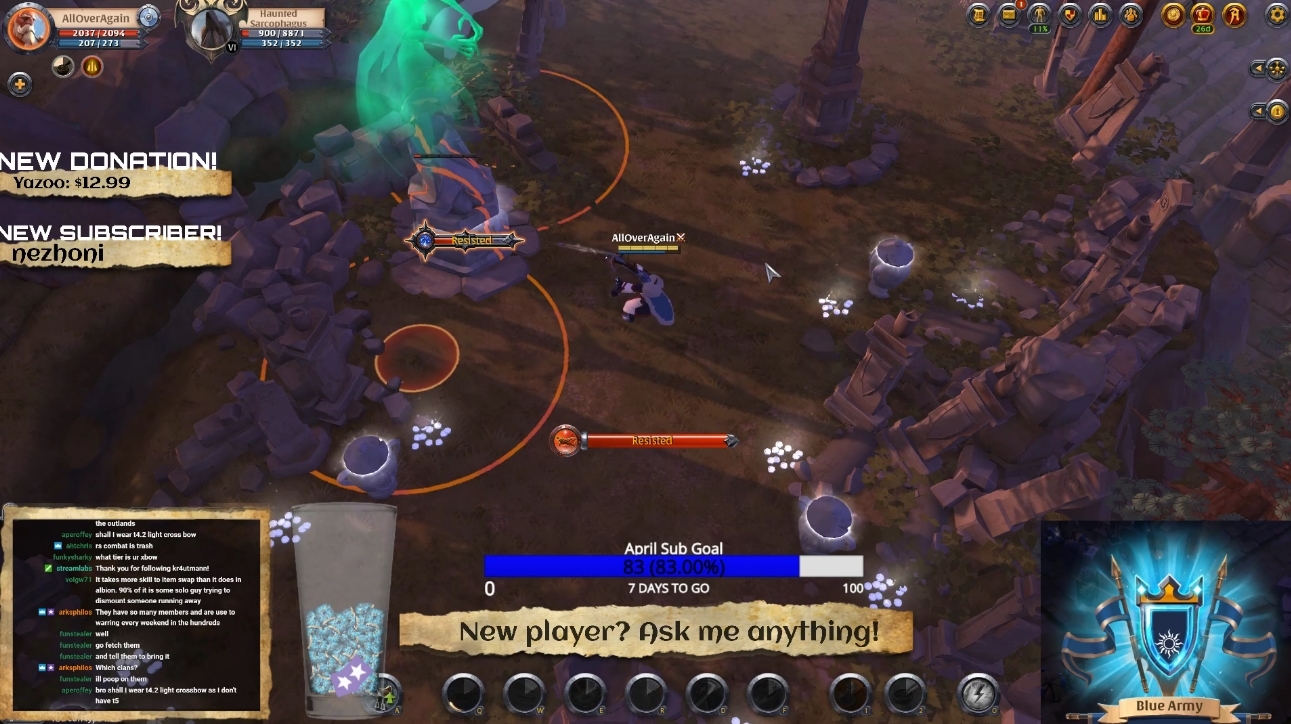 I’ve only just got into streaming actually. I started in early April after successful growing my YouTube channel, and with the F2P launch I wanted to help all the newer players understand the game better. Over the last two weeks the support has been insane, I got Twitch Affiliate within a week and hit over 1,400 followers and 85+ subscribers in my first two weeks of streaming. The Albion community is GOD TIER!

I wouldn’t know too much about this, but from a viewer standpoint the game is full loot PvP and there can be stream snipers, etc. So covering up your minimap and zoning area is highly important for anyone streaming Albion.

It all depends on where I left off the day before, I started a whole new account that’s 100% SOLO content, so both PvE and PvP, and it’s completely from scratch. So one day I might be up a couple million Silver so I can go out and PvP all stream, or if I die a lot it’ll be a rebuild stream, which is also good to show newer players how easy it can be to make money in Albion. But I love Albion because I can zone out from a city and do whatever I want, it’s completely up to you what you wanna do and when you want to do it.

I have a couple awesome moments while building my new account, one of which is finding a 6.3 Random Dungeon map from a hidden treasure, which sold for 2.6 million silver:

Another awesome moment is going 1v2 in the Black Zones and winning by a sliver of health:

Or when I called a Direwolf Puppy drop and it actually worked...

I really want to get into streaming large scale Zerg vs Zerg fights with Blue Army, hopefully within a couple weeks we’ll be seeing that content on my channel.

But for now I wanna focus on my solo build account and see how far I can get it, as I’m nearly Tier 7 on my build.

Make sure you cover your map and other areas to limit stream snipers, engage with the chat and show off the content Albion Online has to offer… that’s SOOO MUCH different content to show others and for others to enjoy.

Just wanna say thanks for the massive support on both my YouTube channel and on Twitch from the Albion Online community, it really has been a crazy couple weeks and I’m loving every minute of it. And thanks to the developers for making such a fun game to play and stream!

Can you share some of your favorite clips with us?

HOW TO: Use Runes, Souls & Relics To Improve Your Weapon & Armor Guide!

Stay tuned for more spotlights in the coming weeks, and be sure to follow Robinhoodrs on Twitch.