This week's spotlight focuses on Malevqlence, a guild of self-described "thieves and bandits" with an emphasis on small-group PvP. 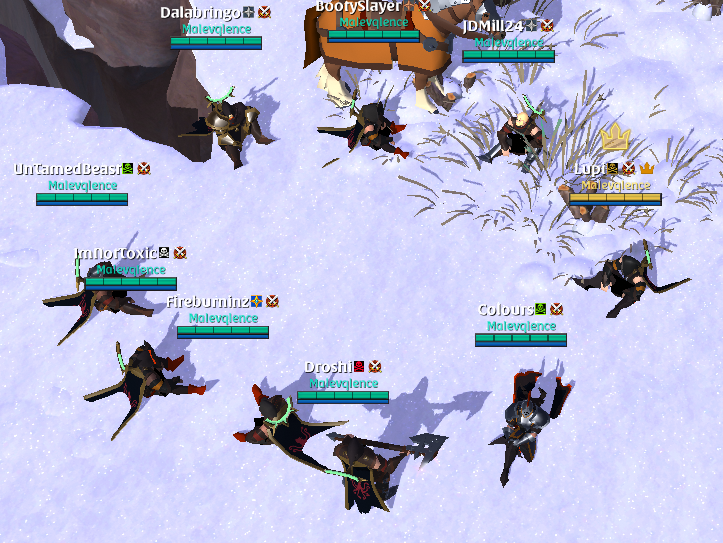 We are exclusively a PvP guild, and we primarily focus on ganking. However we do dungeon dive occasionally. We only recruit relaxed small-group PvPers who want to improve and won't be upset if they die diving into blobs of people trying to pick someone off. It’s important to us that our members are okay with / prefer to be in groups no larger than four or five.

We are located in Caerleon and our primary PvP locations are in Mercia. That is where the best loot is, and is where you will find the most T8 gatherers.

About a month ago we saw a 300 man SQUAD blob zone into Alderwood. We followed them to Hazelwood with a group of seven and sat on the crossroads. Person after person road their wolf/cat right into us. We can only imagine they must have all been muted in a huge discord chat and could not communicate with each other so nobody knew what was happening until we had already caught them:

We like to kill people. Really, we don't do any other content. Our members get upset if their kill fame gets too close to their mob fame. Everyone wants to be known as a killer or bandit. It’s the content we have chosen, and it never gets old for us.

Our approach to PvP and ganking especially is to keep our groups small. Five is pretty much our budget. The reason we do this is to keep our profits high. A normal day for us might consist of 25 million silver in loot. Split that 5 ways we each make 5 million silver. Split it 9 ways (We would consider this your average Mercia gank group) and you only make 2.7 million silver. There is nothing that a six-man group offers that your group wouldn’t already have.

Our goals in the world of Albion are to become known and feared as open world PvPers. We want to be hated because of what we are good at. Fueling the anger is what makes our day. We are thieves and bandits, after all.

We don't like big alliances. The larger your alliance is, the fewer people you have to kill. We don't care if we die. All that matters to us is improving as players and making plays. We are always outnumbered when we accept team fights, and that is okay with us. We absolutely hate people who have T4 or naked scouts, and this is probably why we don't dungeon dive as often as we could.

Malevqlence is recruiting for a very limited time, if you are interested in joining send a letter to Lupi in game.

Can you share some videos of your guild in action?

These are some examples of how we PvP. We don't have healers when we gank so we have to be smart about it. Generally that means we will find the healer and dismount them first, assassinating them quickly enough that even if their team dismounts to help, their cooldowns will come up too late:

Our allied guild is Peasantts. They are another small-scale guild like us and a few of us have played together since the first beta: