The second guild featured in our new Guild Spotlights is Fricks, a fun-loving crew that also packs a mean PvP punch. 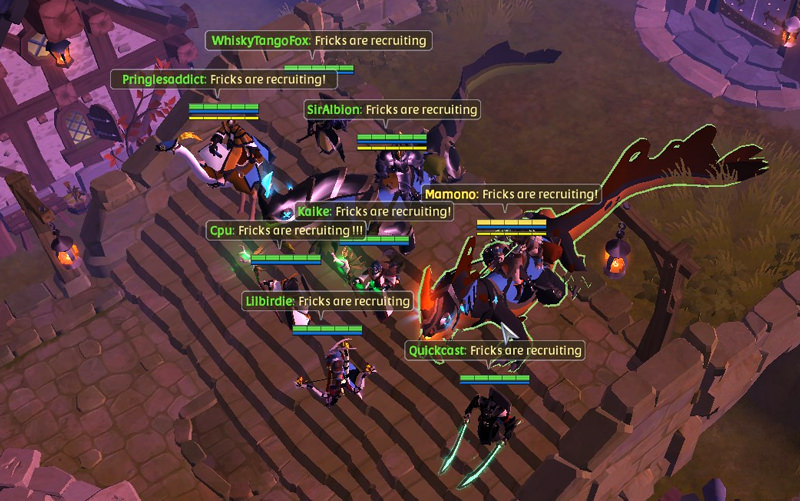 Who says nice guys finish last? Fricks may be known primarily as an overall fun and positive-vibes guild, but they can still bring the heat when needed. They reached Crystal ranking in the second GvG season, finishing in eighth place overall, and are part of the resurgent POWER alliance that was recently formed by current season leaders Team Casualty. (See here for more on the POWER saga.)

Fricks was founded on launch day by Veetus. The Filthy Casuals merged into Fricks several months later, and today Fricks are a very solid guild in the world of Albion. Fricks as a guild are all about community. We like to promote a wholesome and fun environment for our members and we feel we do a good job of that. Our focus is definitely PvP, but we experience every facet the world of Albion has to offer.

If you want to have a positive player environment, love to say “Fricks are recruiting” and want to experience a lot of PvP activities, Fricks are probably a great fit for you.

We are based out of Sunlit at the moment, located in Northwest Mercia. We are very much a team. Being a part of a POWERful (see what I did there?) alliance has Fricks going wherever the alliance needs us. Usually that is in Cumbria or Mercia, which is nice because that’s close to home for us.

This tends to change from season to season. Last season, I would say it was Conflict, as we had countless open-world fights with them over Anglia castles. This season, it’s more of a conglomerate of guilds, most stemming from the broader alliance between OOF and POE.

Most definitely this skirmish against the EGO alliance, battling over the Creag Rudd castle. Which was beautifully showcased in this video that Flufferpope put together:

We have our own songs. (Full album coming soon.) We roleplay from time to time. We form gank parties. We dungeon dive. We do faction warfare. We make memories and memes and even freestyle rap in Discord.

Being uplifting and respectful and having fun is how I approach the guild, and I think most of our members feel the same way. I think the fun will be had if all the other things are in place first. All you need is love!

It’s interesting to me that we started out as “just” a Twitch-based community guild, but over time we grew into a strong end-game guild joining hands with meaningful alliances and making a splash in the game. Our goals are to to continue doing what we’ve been doing and creating content for our members – though I think we could be creating even more content like in-guild events with in-game contributions/raffles and loot as rewards. Our end-game goal is to simply have a great time playing Albion Online.

Guild Spotlights is a series intended to introduce Albion's numerous guilds to the community at large. If you'd like your guild to be featured, please message PrintsKaspian or Evoque via the forums.