From basic tips to higher-level strategy, this is your one-stop guide to the Albion Arena. 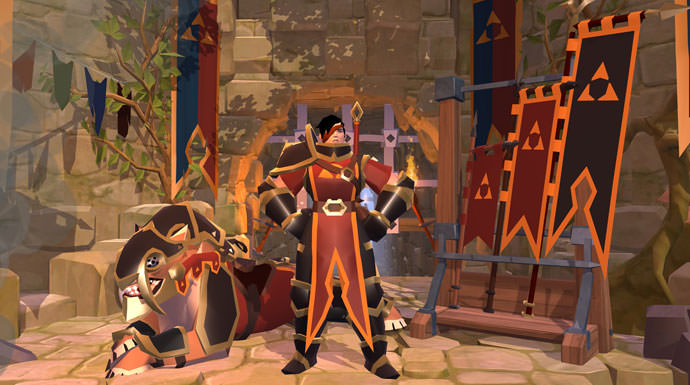 Welcome, Adventurer! The Albion Arena, you say? Come closer and let me tell you about this place and the wonders within.

This is a basic guide for the Albion Arena, a fast-paced 5v5 battle of skill, subterfuge, synergy and brute force. The Arena can be joined from any of the major cities by simply talking to the Arena Master. You may choose to enter as a group of up to 5 players - commonly referred to as a "premade" - or individually, where you can join other players to fight for bragging rights, hone your skills, or simply try to win Arena Tokens, the highly sought-after currency of the Arena. These can be traded in for a number of aesthetically pleasing vanity gift options at the Arena Master, ranging from capes and banners to different skins for your mounts!

Wait, you say, what do I need to bring to the Arena? The answer is actually very little. A starting set of T6.1 gear or equivalent is generally recommended - and as the Albion Arena is a non-loot PVP environment equivalent to a yellow open-world zone, you won't lose your gear if you're knocked down. While you could wear lower-tier items, the fearsome Arena trolls are not known for their tolerance should you do so! The low entry requirements mean that Arena can be enjoyed by everyone, and while it is true that better equipment will add an advantage, the equipment level cap in place (800 IP, with a scaling down by 80% for all Item Power beyond that) means that it is more fairly balanced than you may initially think.

A team with an average or above-average skill level and good communication will generally have a good chance against other teams, so consider practicing together and forming a channel on VOIP (such as Discord) to discuss roles and assignments so that you can give yourself an edge. 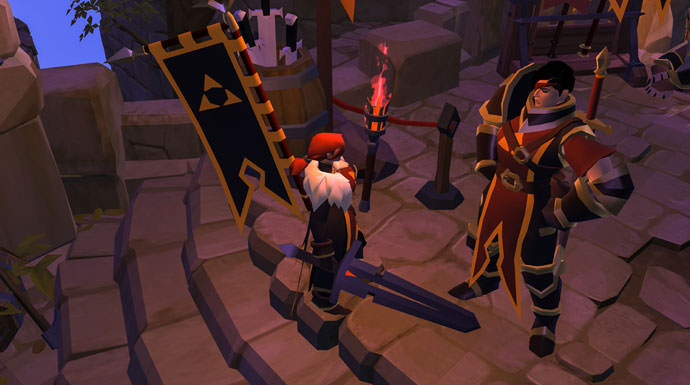 When the Arena starts, the two teams will spawn at separate camps. These camps will be used as a base for teams to recover and respawn as the match progresses. Each team starts with 150 points, and the objective is to bring the opposing team's score to 0 by eliminating them and capturing Runestones. When either team's score reaches 0, the match will end and the team with points remaining wins.

The Runestones are situated in the top northwest and northeast corners of the map with the final Runestone in the center of the map in an inverted triangle arrangement, not unlike the desert maps for GvG fights. Runestones become controllable 60 seconds after the teams are able to leave their camps. This gives teams a chance to start working together to formulate an initial plan.

Runestones can be captured when at least one team member enters the ring surrounding the Runestone. The color of the ring will then change to blue to show you have control of the point.  However, should an opponent enter the ring, the capturing progress will be halted. Fighting off the opponents and regaining control of the Runestone will allow the capturing process to continue. If your team loses control of a Runestone, the color of the ring will change to orange to signify this. Once a Runestone is captured, it will be destroyed. Once all three Runestones have been destroyed they will be automatically reconstructed and become capturable again after a short time, which gives you a short window to head back to your camp to recover. 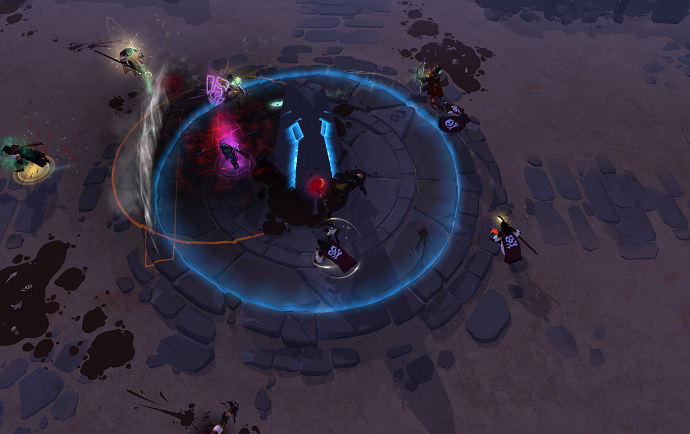 The key to the Arena is a complex mix of ownership of the Runestones with assigning your team members to the correct roles and tasks, as often you may not end up with the team you would have chosen. Let us examine the basic roles that can be filled within the Arena for some insight into group composition. Do not worry if your team does not have the ideal composition - tight play and skill levels can often be just as decisive.

Tank: The front-line operator with high health and damage reduction, almost exclusively used to break the opposing team's fluidity with stuns and to get in the way as much as possible. Usually armed with a Quarterstaff, Hammer or Mace, although Arcane builds are also seen. These characters are predominately in heavy armor, although some leather or cloth pieces are becoming popular for the additional abilities they can offer a team. The tanks' damage output is not high, but their role is vitally important to the team, and played well they can be the difference in an otherwise even battle.

Bruiser: Melee classes often appear in the Arena armed with a weapon from the axe group, a Galatine Pair, or a Clarent Blade. These weapons all offer an explosive area-of-effect damage blast which, used in conjunction with a burst damage class, can tear a team to shreds in seconds. Being bunched up and facing down one of these weapons can prove to be a poor decision, so situational awareness is a huge asset. Expect players in this role to use all of the dirty tricks in the book when it comes to abilities.

Single-Target Burst DPS: A player looking to fulfill this role will often be armed with a one-handed fire staff, a weapon from the crossbow group, or a one-handed spear. Dagger pairs are also breaking into this role, mainly thanks to the work of streamers such as Nomad Poncho, who have shown that off-meta choices can often do amazing work in the hands of a skilled player. All of these weapons are capable of inflicting huge amounts of single-target damage, which, if combined with a Bruiser, can be fatal. These classes tend to be more lightly armored and can be attractive targets, so listen to your caller's shouts on switching targets to ensure maximum efficiency. If you engage without a healer backing you up, however, a straight fight can be fatal, so use caution.

Zone Control: This is where the Frost and Wildfire staff wielders excel. Their ability to channel people into areas where they are less impactful through the use of AOE spells is very important. This role is great if played well, but awful if played incorrectly, as being out of position in this role will get you isolated and targeted instantly. Again, situational awareness here is key, and the defensive use of spells is every bit as critical as the offensive use for this role. Keeping track of which spells have been used can allow you to push harder during cooldown periods.

Healer: Holy or Nature - each has strengths and weaknesses that clever opponents can exploit. The nature artifact Rampant Staff is currently a very powerful weapon, and after an initial period of uncertainty is has been embraced by players as a weapon of choice for 5v5 content. This role, more than any other, requires clever play and constant movement to stay out of harm's way while keeping your team alive. The healer must be protected, as they will suffer from a lot of unwanted attention in the course of a battle. Some teams utilize a double-healer setup which can be frustrating to play against. To beat these teams, you will need to focus fire while neutralizing one of the healers. This is often far from an easy task, but practice should always be seen as worthwhile. 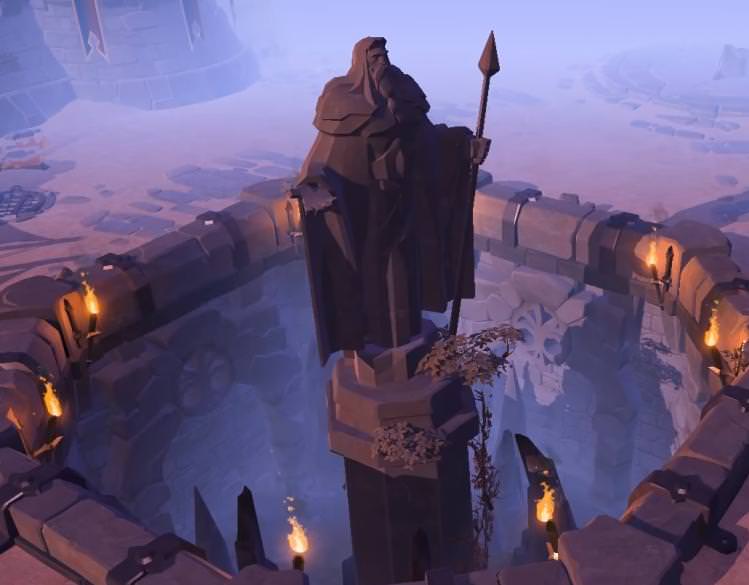 Now that we've covered the basics of team roles, let us consider a strategy for teams that are not premade. A basic strategy often used by groups is to adopt a 4/1 approach, with the person most suited to 1v1 combat (often a Bruiser or single-target DPS build) taking responsibility for capturing the nearest top Runestone before rejoining the team in the center. Counting the enemy team's numbers is very important during the fight, as it will indicate how many players they have assigned to capture each Tunestone. If you don't see four on the bottom point, you will need to quickly react and assist the lone team member you sent to capture the Runestone.

This should hopefully give you some basic insight into the Arena. It is a rewarding experience that, with the right group, can give you hours of enjoyment. To conclude, failure to react quickly and lots of early deaths can seem catastrophic, but the Arena is well-known for its forgiving nature and the ballads and bad-beat stories that echo around the halls of Caerleon tell us of epic comebacks and single-point wins. Such is the glory of the Albion Arena - will you become part of the legends that unfold from within?